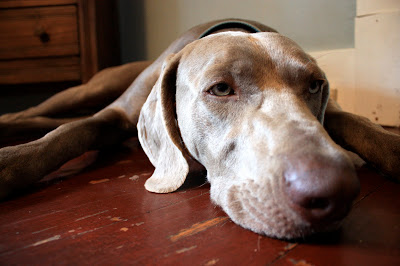 Story: While working at Rainbow Blossom Molly met two Weimaraners--Olive and Jack. We had been wanting a second dog for a few months (because we mistakenly thought Kola's mellowness was a sad yearning loneliness) and because she had fallen in love with the temperaments of Olive and Jack we looked around on the internet for a litter of puppies. Ryder had been born two weeks previously and things worked out so that we could pick him up on the way home from Paul and Cameron Jones' wedding in Chatanooga, at a farm in Whitley City KY. Adam and Sam helped us bring him home and true to form he never whimpered or even peed in the car...choosing instead to try and eat things and sleep like a log. 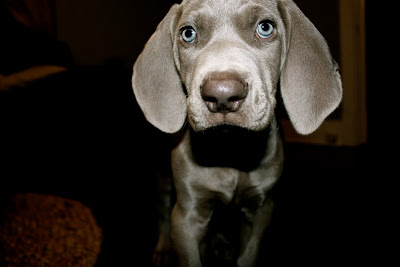 Hobbies: escaping (from car windows even when moving, from fences, from his crate) only to sit outside of whatever boundary he has crossed, gloating, until we find him. Eating anything and everything (including eggs shell and all, chickens...alive or dead/cooked or un, rocks, sunglasses (RIP)). wrestling with Ben and Kola. Swimming. Cuddling. 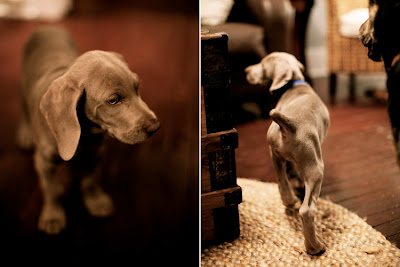 Pet-Peeves: Hunger. That is all...you could literally do anything to Ryder and he would not mind. 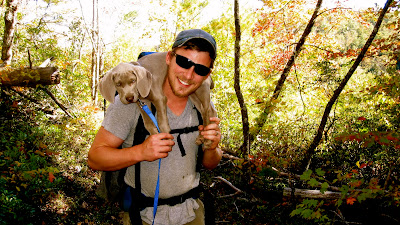 Sleeping Places: Crate (he does really well for a Weim, but never fails to moan like a dying old woman at 6 AM EVERY morning), anywhere...including on the sidewalk during a walk if he is too hot. 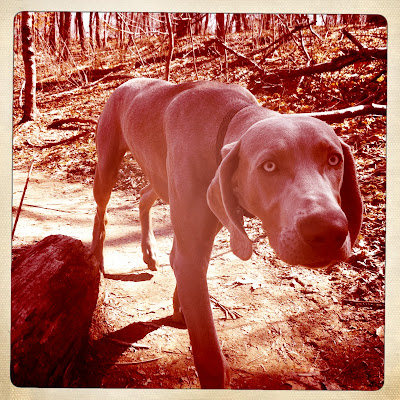 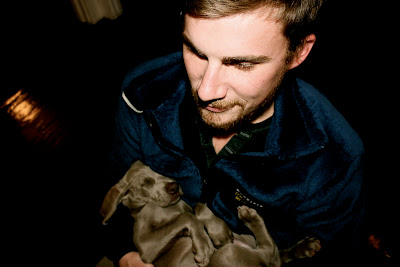 Quirks: Despite his very boyish nature Ryder is one of the cleanest things about our house. He bathes himself meticulously and if he is ever cut he somehow cleans it into healing every time. Ryder will literally follow us anywhere. Ryder hates dancing and will try to bite any dancer until they stop. Ryder feels no pain--we once tried an invisible fence and he would literally walk right over the line barely stopping to shudder...this would seem to indicate that the fence wasn't strong enough, but I tried it and almost cried, Kola yelped at the top of her voice the one time she got shocked, and Lincoln, a Pit Bull/ Lab mix frantically ran around our yard in circles whining when he tried on Ryder's collar...yikes. 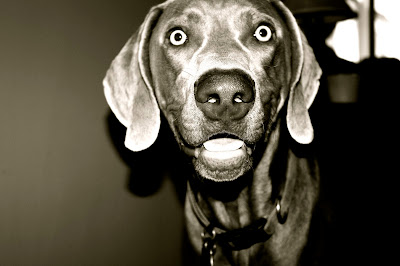 Posted by Molly Roberson at 6:16 PM

I absolutely love your blog.. Very nice colors & theme. Did
you make this amazing site yourself? Please reply back as I'm hoping to create my own personal blog and would love to find out where you got this from or exactly what the theme is named. Thank you!

I am actually happy to read this website posts which contains lots of helpful data, thanks for providing such data.


Look into my page - breast

We stumbled over here coming from a different website and thought I may as well check things out.
I like what I see so now i'm following you. Look forward to going over your web page repeatedly.

It's very easy to find out any topic on web as compared to textbooks, as I found this piece of writing at this website.

Excellent post. I was checking continuously this blog and I am impressed!
Extremely helpful information particularly the last part :) I care for such information a lot.
I was looking for this particular information for a very long time.
Thank you and good luck.

Hello, I desire to subscribe for this website to
get most up-to-date updates, so where can i do it please assist.


Here is my web-site: bancuri emo

Write more, thatѕ all Ι have tо sаy.
Literally, it seems as though you reliеd on the νidеo
to make уour point. You obviοusly know what уoure talking about, ωhy
throω away your іntelligence οn juѕt posting videoѕ to your site whеn you could be giνing us something informative tο гead?